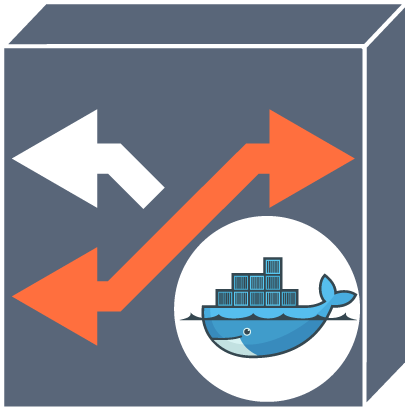 In one of my previous articles, I elaborated on a setup to create DC fabric simulations with GNS3 and OpenSwitch. I also promised to follow up with some post about using Ansible with it.

Well, I have been a bit distracted with some changes to the setup before moving into the Ansible details (to say true, I got the Ansible article almost ready, but things are moving so fast, that I keep rewriting it).

One of the things that ‘change everything’ recently was the release of GNS3 1.5. This is a great release that includes several features that makes using OpenSwitch with GNS3 awesome:

Let’s see how to use this new release with OpenSwitch Appliance Container.

The first recommendation when using the container setup for GNS3, is to use the GNS3 VM (even when using a native Linux host). Why?

Since we will be using qemu appliances inside the GNS3 VM, you need a virtualization platform that supports nested virtualization. That means you are either using a VMware desktop solution (Workstation, Player or Fusion), or if using ESXi, be sure to enable the VHV flag.

Download the VM from here. Be sure to download the right image for either desktop solution or ESXi.

After downloading the GNS3 VM appliance, import it into your virtualization solution, and reconfigure with this minimal hardware requirements:

If you are behind a corporate firewall, be sure to turn on the VM, and using the menu displayed when the VM boots, configure the proxy settings. 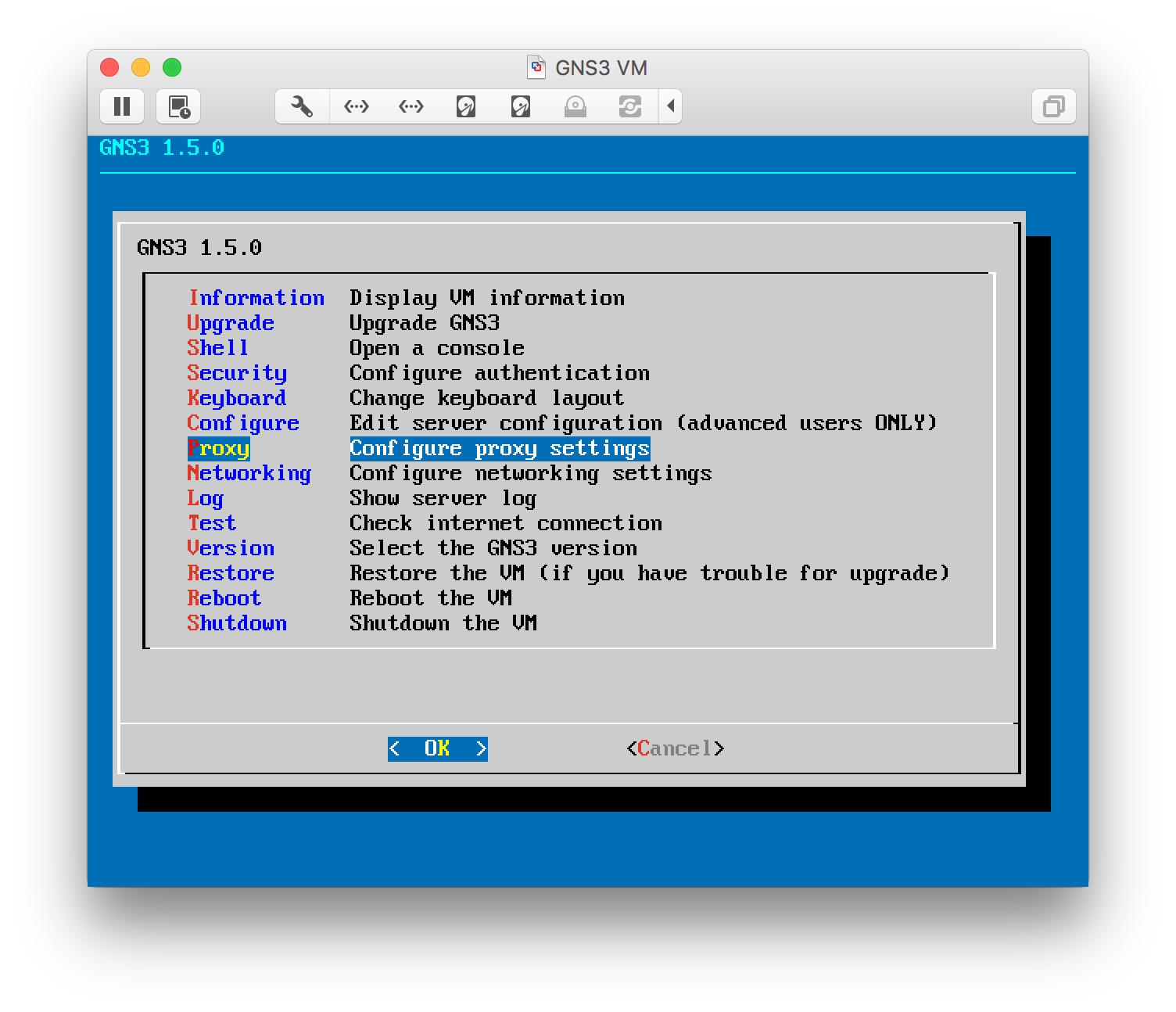 Configure GNS3 to use the VM

If you haven’t already, install GNS3 downloading from here (be sure to use the same version as the VM image that you downloaded).

When configuring GNS3, the wizard doesn’t allow you to configure a remote server GNS3 VM, but you can abort the wizard, and add it later from the preferences panel (the IP address of the VM is show on the information page displayed by the VM on boot, or available from the text menu on the VM as well).

I found that when working behind a proxy, the VM only works well as a remote server, since somehow the communication with it cannot be established by the UI in the presense of a proxy (I have only experienced this with OS-XmacOS environment, not sure if happens on Windows or Linux). 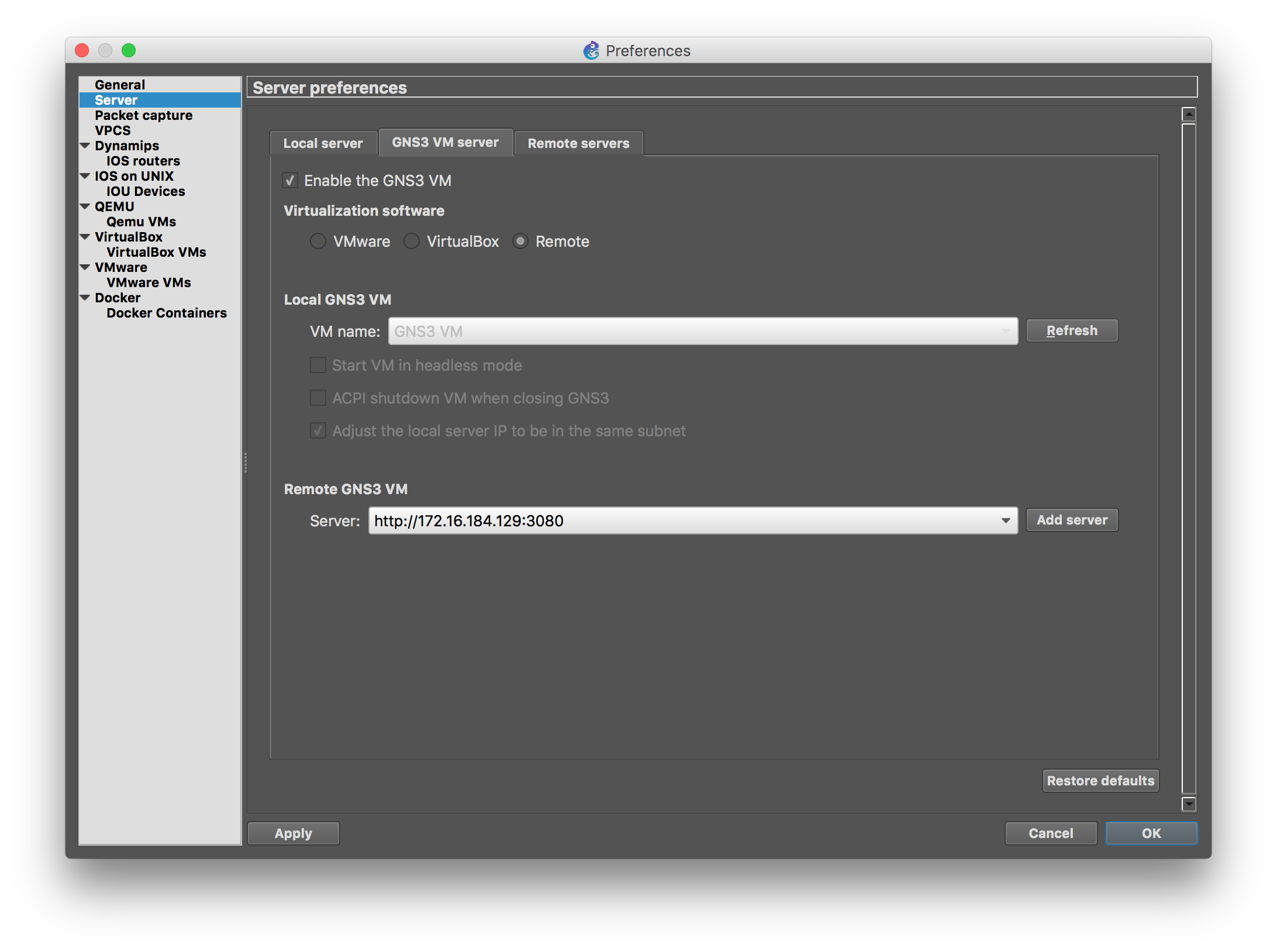 In order to use OpenSwitch as a container with GNS3, you have to main options: use an existing image (easier one), or build a custom one from scratch (useful for developers).

Let’s focus on the simple procedure first. Fortunately we no longer need to specify multiple parameters on the UI to create a template, since for Docker containers we can use a pre-defined template appliance (.gns3a file), that will do all the configuration for you.

Once you are done with the import, you can download a custom stencil for OpenSwitch Docker Appliance from here, and customize the template to use it.

The template uses by default 8 ports, but that can be adjusted in per machine instance.

That’s all it takes, you are ready to drag & drop container instances into GNS3!

In the previous step where we used the .gns3a file, it points to a published version of the container in the Docker Hub, but you may want to create your own container from scratch with the latest code or modifications. If that is not the case, you can skip this section.

First you will have to build an image for the appliance target as explained in previous articles (you can also download the tarball for a periodic build from the artifact archives).

An important clarification: if you are a developer from OpenSwitch, you may be used to know the ‘genericx86-64’ target as the container image used for testing purposes. However on GNS3, we actually use the OpenSwitch Appliance images. This have implications on the naming of the ports (ports are called ethX).

Now, the default tarball created for the appliance is designed to run in a VM, so it needs some small modifications to run properly on a container. I have automated the steps in a docker file here.

Here are the example commands to create a custom image with the latest code from master and push into the docker hub (in this example I use my docker hub account):

Now you can modify the gns3a file provided in the previous step and point to your customized image to import it into GNS3.

Creating a topology for Ansible experimentation

Now, let’s create a topology for creating a DC Fabric simulation with Ansible similar to the one described in the previous article using virtual machine appliances.

I have created a docker container that already automated all the steps detailed in the previous article, and is suitable to be run as a systemd container. The Dockerfile could be found here, and the GNS3 template file here.

Unlike the previous examples using VirtualBox, we cannot longer use the cloud element to get a NAT connection to the external world, so instead we will use the GNS3 Internet VM Appliance.

After installing those two templates, we can recreate the DC fabric similar to the one from the previous article, with the difference that is (almost) all containers.

Now comes another cool part, you can export and import the project to share with others.

Yes, that means you can ignore everything I just said about importing templates and drawing topologies and just download a file with everything ready. I know I could have started saying this, but where is the fun if not in do it by yourself?

So, you can export the project by using ‘Export portable project’ on the file menu. It will ask you if you wan to include any base image, which for our example I would recommend we do (this will pack the qemu image used by the GNS3 Internet Appliance). Docker images won’t get included on the file, but instead will be automatically downloaded from the docker hub when someone imports the project.

The portable project file for the example on this article is here, in case you want to get up an running.

Isn’t all of this really exciting? Thanks to the GNS3 team for their awesome work and their responsiveness to fix the bug/enhancements that I keep throwing at them.

In the next article I will continue with explaining how to use Ansible to deploy configuration to the topology we build here.